Thanks to Medical News Today for the image.

I would say that, because I’ve grown up in Missouri, I’ve been aware of Lyme disease my whole life. Honestly, though, I never took the threat seriously. That all changed when my college friend Krista posted a rather lengthy, very serious post on Facebook.

She said that, after months of symptoms and suffering, she was finally diagnosed with Lyme disease. After reading her account, I found a new respect for this often-ignored disease. Here’s what I found out and why anyone who lives in an area with ticks should be cautious.

What Is Lyme Disease?

Lyme disease is caused by the bacteria Borrelia burgdorferi, and it is transmitted to humans by a tick bite. It is impossible to tell if a tick has Lyme disease by simply looking at it. If you think you have symptoms of Lyme disease, find a Lyme-literate doctor and begin testing. The most common tests involve analyzing a sample of your blood.

To do your best to prevent Lyme disease, use insect repellent when outdoors. When you come in from outside, immediately take off your clothes and look all over your body for ticks. The best way to ensure you never get Lyme disease is to make sure that you don’t get bitten by a tick.

According to the Center for Disease Control and Prevention, early symptoms of Lyme disease (which show up after 3 to 30 days) include:

Some Lyme disease symptoms that show up days to months after a bite are:

When Krista’s husband decided to trade his job with the Air Force for a job with the Guard, they decided to move. They chose Syracuse, NY because of it’s large amounts of annual snowfall. Once they found their new home, Krista and her kids moved to NY while her husband stayed behind to finish his job.

Frequently, Krista and the kids went hiking. They went to all the parks and were outdoors exploring their new home constantly. When they would return to the house, Krista checked the kids for ticks each time. However, she didn’t do as good a job checking herself.

Apparently, she got bit by a tick during this time. She never saw a bull’s-eye rash or found a tick, but she was bit somewhere. Her first main symptom was anger.

Her husband joined the family about four months after Krista and the kids moved. Early on, he confronted her about her personality change. She realized that she felt angry, but thought she was justified to feel the anger that she did.

Then, she started having fevers daily. Realizing that this was a symptom of an issue, she went to the doctor. Right out of the gate, the doctor tested for Lyme disease. Unfortunately, Krista and her doctor were unaware at the time that the standard blood test for Lyme disease is only 50% accurate. Krista’s test came back negative. About 18 months later, she would find out that this was a false negative.

As time progressed, her symptoms increased from anger and fevers to include:

Krista was about to go to Mayo for more tests when her neighbor stopped her. Just years before, her neighbor had gone through the same situation. She had Lyme disease, and she learned that the best test for Lyme is the Western Blot, a test that is run in California. So, Krista got a blood sample ready and sent it to California.

Her results came back positive. In fact, Krista learned that the particular tick that bit her didn’t just have Lyme disease; it had 5 other diseases also. For example, her anger has been identified as a side effect of babesia, which is a parasite transmitted by ticks that impacts red blood cells.

Additionally, Krista now suffers from Lyme dementia, which isn’t currently recognized as a disease by the Centers for Disease Control and Prevention (CDC). Krista explains that she has Lyme dementia “because it took them so long to figure out what was wrong. It’s in every system in my body.”

It’s much harder to eradicate the bacteria once it’s gotten to that stage. In September 2017, she decided to quit driving because she kept getting confused and lost while navigating her small town.

Fortunately, Krista has found a nearby Lyme-literate doctor. This is extremely helpful because of the complex nature of Lyme disease.

Krista explains, “Lyme is called ‘the great imitator.’ It’s because the symptoms could belong to a whole list of other diseases.” Unfortunately, this means that the symptoms of this disease don’t necessarily classify the disease.

This leads to additional testing. Since her diagnosis, Krista has been tested 15 more times for diseases like MS, ALS, and fibromyalgia. She continues fighting Lyme disease (and the 5 other diseases that she got from that one tick).

For more information on Lyme disease, here is a link to the CDC website. If you’re wanting to find a Lyme-literate doctor, here are a couple of websites to check out.

Do you have any more information about Lyme disease? Please share so that we can use this page as a resource for others with this disease.

Hi, I'm Sarah! I'm a certified Pilates and yoga instructor with a passion for pain relief. I believe you can use simple exercises to relieve your aches + pains. AND, I believe I can teach you how.

View all posts by Sarah Stockett → 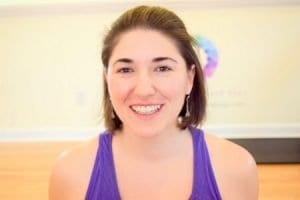 I believe you can use simple exercises to relieve your aches + pains.

Aches + Pains Slowing You Down?

Spinal Rejuvenation will teach you simple exercises that relieve your pain right away.